Soybean (Glycine max) is an edible legume, which can be consumed in forms of pods, seeds, granules, chunks, isolates, etc. as well as other delicious products derived from soy like milk, yogurt, cheese, tofu etc. Though originated in East Asia (specifically Central China, Japan, and Korea), soybean is now widely consumed throughout the world.

Nutritionists have  long claimed that soy provides a wide range of health benefits, such as lowering rates of heart attack, reducing blood cholesterol levels, relieving menopausal symptoms in postmenopausal women, and in the general enhancement of the immune system. But new scientific evidence suggests that it also has a role to play in hair and skin health. This includes reduction of hair loss in androgenetic and female pattern baldness.

Lets see how this works.

DHT (Di Hydro Testosterone) is a key player in both male and female pattern baldness. It is formed in body as a breakdown product of testosterone by an enzyme called 5 alpha reductase. DHT binds to protein androgen receptors on the hair follicles which have affinity to DHT, which in turn is determined by genetics. The binding of DHT triggers follicular inflammation that leads to  progressive injury and consequent miniaturization of the hair follicles with fibrosis.

Soy is a rich source of isoflavones, including genistin and daidzin, the precursors of the estrogenic genistein and daidzein. After the conversion, daidzein is further metabolized in the intestine to equol.

Equol acts as a very specific and unique DHT blocker. Unlike other androgen blockers, it does not block androgen receptors, but rather binds DHT strongly. This makes DHT unavailable to bind with androgen receptors on hair follicles. Thus, the biological activity of DHT can be modified resulting in prevention of follicular miniaturisation.

5a-reductase enzyme blockage prevents breakdown of testosterone to DHT. Blocking this enzyme is the mechanism by which Finasteride works to prevent DHT production and hair follicle miniaturization. A study on prostate tissue found that genistein and other isoflavones were also capable of blocking this enzyme.

For more scientifically inclined, here are some scientific article references, 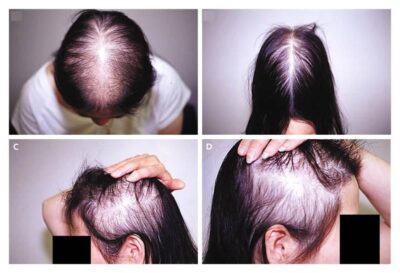 Female Pattern Baldness : Can You Prevent it?